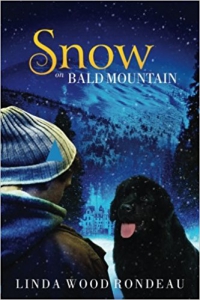 Snow on Bald Mountain
Christmas is a time for miracles

Ryan McDougall still has much to learn about this life called Christian. When his wife tells him she is pregnant, he looks to make a change, especially since Ma’s cousin Millie has moved into the already crowded house on Maple Street. Ryan takes a job as caretaker for a Bald Mountain estate owned by an eccentric, elderly woman. He hadn’t expected to become attached, not only to the natural beauty that surrounds the property, but to the owner herself, the widow of a famous politician and the daughter of an early twentieth-century petroleum tycoon. As the McDougalls befriend their generous employer, Bald Mountain bursts with new energy until a Christmas blizzard and pregnancy complications bring Ryan to his knees yet again.

This novella was an enjoyable read and I admired the characters which is important for me. This is a sequel to the novel Miracle On Maple Street which is next on my list as I continue to explore the writings of Linda Rondeau.
I look forward to reading more books by Linda Rondeau.

I fell in love with the family, the dog, and the eccentric old lady, and I wanted more! Still--it is enjoyable story-telling.

I really enjoyed this novella! What a great way to celebrate Christmas by reading stories like this one filled with God's provision and love for us. Linda Rondeau won my heart through this book. I can't wait to read more if her work.

This author certainly knows how to bring her characters to life, and I thoroughly enjoyed catching back up with Ryan and his wife and seeing how God has continued to work in their lives. This is another inspiring story from this author that I wholeheartedly recommend.

I don’t remember ever seeing my mother so happy. After Mom’s reunion with Millie, she became a permanent boarder. I laughed at how the women hovered over old photo albums, giggling like teenage girls, as if there’d never been four decades of rift between them. Spiritually joined at the hip, they went to Ladies’ Prayer Meetings, worked at the food pantry and participated in the Women’s Prison Ministries. Wonder of wonders—Ma got a job waiting tables at Belle’s Café.

Sometimes days would go by without seeing either Mom or Millie even though we all lived in the same house. That suited me just fine—gave Penny and me time to be by ourselves, especially when I worked the graveyard shift.

A new normal settled in on Maple Street, one that found me whistling most mornings instead of worrying. I thought my life was complete and that nothing more could be added.

How could I have known God had more lessons in store?

Spring brought refreshing breezes and blooming lilac bushes. Hope filled our days as never before. R.J. grew like pigweed, so fast he went through two sizes in less than a year and bucked around the house like a newly saddled stallion.

One couldn’t trust April in the North Country. Eighty degrees one day and freezing temperatures the next. When I thought it safe to store my overcoat and haul out my golf clubs, winter revisited, leaving upwards of two feet of snow, and a seven-year-old begging to take his sled out of the shed.

I should have learned that life, like a North Country April, is rarely constant. Perhaps God settled Mom’s spirit so he could start fresh on me, chiseling me to His vision of what I should be. Metamorphosis happens slowly; yet, it always begins with climate change. One day the caterpillar knows the time has come to cocoon itself. Humans aren’t so smart. Sometimes God causes change by taking us on a road we’d never thought possible.

I grew weary of April’s temper tantrums. When winter is long, a man can’t wait for spring to free him of entrapments. I yearned to roll down the truck windows and feel summer breezes against my face instead of sleet. Perhaps that was the fodder for my growing restlessness, like an itch in the small of the back, out of reach but not out of mind.

My wife and I sat down to a special breakfast of pancakes and sausages. I thought I saw a slight gleam in Penny’s eyes as she blurted out, “You know, Ryan, your mother doesn’t really need us living here anymore. Maybe it’s time we found a different place.” A mystical beat followed her broad smile. “Before the baby’s born.”

I nearly choked on my last bite of sausage. After recovering from near death, I jumped in with both feet paddling. “Are you trying to tell me you’re pregnant?”

“Guess so. The stick doesn’t lie that often.” She tilted her head to one side and gave me a pleading look. “I hope you’re not mad.”

She handed me my lunch consisting of a peanut butter and jelly sandwich, a banana and thermos of coffee. I hated to leave at that minute but knew I had to be at work on time. Old man Henderson, the factory foreman, would dock a man an hour’s pay if he were only five minutes late, union or not.

She gave me a teaser kiss and shoved me out the door. “I know. Now go make some money.”

The morning dragged on like a heat wave in mid-August, Penny’s proclamation stewing on the back burner of my mind. Mom’s house was big, but no more empty bedrooms since Millie moved into the guest room and Mom returned the study back to its original purpose so Millie could work on her missionary memoirs.

If we were to have a nursery, I’d have to do major remodeling. A battle not worth fighting since Mom didn’t want the house changed, “in case your father comes home.”

In a Nashville prison and dying from end-stage lung cancer, Pop wasn't likely to make it home anytime soon—if ever. Mom and Millie had made three visits to Nashville to see him. While his condition had stabilized, I didn’t see much hope that he’d live long enough to be released. If by some miracle he did survive to see parole, I couldn’t imagine Mom managing his care without plenty of help—help I was reluctant to provide.

I knew I should be more compassionate, extend the same forgiveness to Pop that God had given me. That kind of emotion doesn’t come without a Holy Ghost dousing, or God taking a weed whacker to my resistance. So far, my heart wasn’t ready. “Someday, Mom,” I told her. What I didn’t say was, “Pop doesn’t deserve forgiveness. Not after leaving his son and wife with no explanation, a missing person for over twenty years.”

I managed to find plenty of excuses not to visit him. My mother scolded my petulance. “Don’t wait too long, Ryan. I’d hate to see regret replace reluctance. If someone dies, you can’t ever go back.”

Perhaps I believed I could handle regret better than confronting the truth. I’d manufactured myriad fantasies to explain my father’s absences. In one scenario, I imagined he was a CIA agent and was forbidden any contact with his family—too dangerous for him and too dangerous for his family. That would explain why he never called or wrote all those years. Reality had been much harder to bear—that he’d gotten drunk and incarcerated for vehicular manslaughter. How does a son wrap his head around the fact his father killed an innocent woman?

Maybe God would be gracious enough to orchestrate his release, but did that mean I had to play nursemaid to a felon? Penny’s pregnancy provided the perfect excuse to move out and avoid a web of added responsibility.

Paying rent for a decent home or buying a house seemed beyond our financial reach, especially with my low-paying factory job, even with all the overtime I could manage. Nor did better-paying jobs grow on trees in a small town like Granite Falls.

Perhaps a job in Albany or nearby might be the answer.

What kind of work would I do? I hadn’t given it much thought until that day. Not counting my probation work at Belle’s, the Army was all I knew until I came home to Granite Falls. I did have my MP experience and the equivalent of an associate degree in criminal justice. In the North Country, those jobs came about because you knew people who knew people. Who did I know besides a cop friend in Albany I hadn’t seen in over a decade?

During lunch break, I grabbed the Albany newspaper and flipped open to the help wanted section. The job intrigued me. Caretaker needed for the Langston estate on Bald Mountain. Position includes housing. Salary negotiable. Apply in person.

I scribbled down the address for further thought.

My usual business didn’t take me toward Albany very often, but when it did, I preferred to drive through Bald Mountain, about twenty minutes from the city. Named for its resemblance to a bald eagle, it loomed on the other end of the town that bore its name, a breath-taking sight, especially on snowy days, fringed with rows of stunted pines that looked like folded wings, leaving a large barren spot at its apex.

The estate, nestled at the foot of Bald Mountain, was as legendary as its visionary builder, Herman Langston. With the advent of the Model T, he realized that cars would soon become affordable for the masses, and that these cars would need gas and mechanics to keep them running. He opened up dozens of stations around the North Country for car care needs, making him one of the richest men north of Albany.

The estate’s current mistress was Herman’s reclusive daughter, Allison Nystrom, a legend in her own right who, along with her famous husband, Lars, championed the cause of a centralized educational system for rural Northern New York.

Though Albany might afford better job opportunities, I disliked city living. I knew nothing about being a caretaker. The job at Bald Mountain might provide that bigger home Penny wanted all to ourselves and we’d be living in the country. Why not a caretaker? Mom said I was handy to have around.

With only fifteen minutes left for my lunch break, I decided I needed to act. I had the next day off. If a thing looks right, go for it.