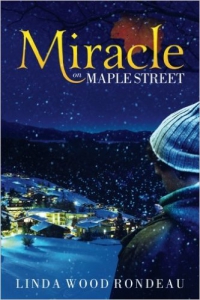 Miracle on Maple Street
"Christmas is a time for miracles,"

This book shows how secrets tear us apart as well as those around us. I loved how the story went from the present, visited the past and then came back to the present to give you a moment to digest how that part of the past affected the present. It shows how what we perceive may not be the actual truth. This is a compelling read for all of us that hurt and need to forgive others. Highly recommended for all!

“Christmas is a time for miracles,” Ryan McDougal tells his mother, when he is told that a long lost cousin, Millie, has resurfaced after nearly forty years, the cousin whose picture his mother clasped the day his father abandoned him. Though they occurred decades apart, he always believed the two disappearances were connected like opposite links of a chain. With Millie’s arrival, perhaps he might finally receive the answers he so desperately sought. However, Ryan has a third thorn in his side, more devastating than any mystery. His wife, the love of his life, has left his arms and his bed. How long before she moves out of the house and takes his beloved son with her? He prays for his own Christmas miracle. Millie’s anticipated visit prompts Ryan’s mother to reveal secrets that bring all to light. However, when past and present collide, the truth is more than Ryan can bear.

Why now? How did I come to this point on this night? Willing to throw everything away, like my father did more than twenty years before? Willing to do the very thing for which I’d hated him?

With doomsday predicted by many in the scientific community, the Y2K bug loomed on everyone’s mind. What did I care if planes fell from the sky because computers would not accept the year 2000? My world had already collapsed. What more could global chaos do to me?

I’d tried for a year to save my marriage. Didn’t tonight prove it was beyond help? Why stay any longer?

Earlier, I finally learned the truth behind the secrets shrouding my life, the trident that pierced my soul. Yet, revelation didn’t bring peace. I pulled my jacket collar over my ears as I wandered down Maple Street, my mind jumbled by a lifetime of lies.

Christmas, one more charade to add to the heap. To me, the holiday had become a one-act play where I pretended delight with feigned enthusiasm. For me, the holiday lost its magic many years ago when my father deserted us while I dreamed of transformers under the tree. An eight-year-old doesn’t expect to begin his favorite holiday in an upside down world. I woke eager to tear open packages. Instead, I found no presents under the tree, no blueberry muffins, and no turkey in the oven.

My mother sat on a chair. She stared blankly out the kitchen window, a gold-framed photograph on her lap. had always enshrined the picture of the pretty but sullen teenager. For reasons never shared with me, the unnamed girl ran away on her sixteenth birthday. I wondered why, from my earliest memory, her picture held a place of honor on the fireplace mantel.

I shook my mother’s shoulder. No response.

Where was my father? He could explain what was wrong—why Christmas dreams turned into yuletide nightmares. I searched for him, first his bedroom then the entire house.

She clutched the picture to her chest. “He’s gone, Ryan.”

“Where did he go? It’s Christmas. He promised to be here when I woke up.”

Pop was a telephone lineman. Whenever he went off for a job, he’d put on his yellow hard hat, rub my head, and say, “Take care of your mother until I get back.” If I’d already gone to bed, he’d wake me to give me the order. I always promised I would.

I rushed to the window. There’d been a fresh snowfall overnight. Maybe Pop had been called out. If he hadn’t come to wake me, he must have left in an awful hurry. He went someplace to save Christmas for other people. To me, my pop was a superhero in a yellow hard hat.

My gaze wandered to the kitchen table adorned only with my father’s yellow hard hat. Superman wouldn’t forget his cape. Why did my father leave his hat? My child’s heart sensed then I’d never see him again. From that point on, Christmas became another day on the calendar where I nursed a zombie-like woman who preferred her sorrow over her son—a woman who hopelessly waited for her man to come back.

Her energy, what little she possessed, would have been better spent in a job search. Our neighbor helped us get welfare so we wouldn’t starve to death. Every Christmas, she brought over a small decorated tree, a ham dinner, and presents. I think there’s a special place in heaven for people like Gina Forbes, one of the few true Christians I’d ever known.

Here I was years later, now dealing with the third fork in the trident that pierced my soul. As midnight zeroed in, I took another glance down Maple Street, the place my younger self couldn’t wait to leave. I’d lived with Stone Woman long enough. So two days after high school graduation, I left to begin my Army career. As I walked out the door, my mother lifted her head. Her eyes misted a goodbye. Were the tears for me or my long-lost father?

Gina Forbes wrote occasional letters to let me know how Mom fared. I spent my leaves anywhere but home.

After basic training, I served as an MP. Somehow, I missed deployment overseas. A year before my hitch ended, I met Penny, a girl with a voice to match her beauty. We married a week later. When you know you’ve found the one, there’s no need to wait. Nine months later, our boy Ryan Junior came along. To avoid confusion, most everyone called him R.J. I went to his room every night to watch him sleep, and I made the same promise. “I’ll never leave you, my sweet sonny boy.”

Yet, here I stood. Ready to break the most solemn of promises.

When my Army hitch ended, I wasn’t sure what I’d do next. Sometimes life makes those decisions for you. For me, clarity came with a package from Gina Forbes containing a card, a blue quilt for my son, and a handwritten note: Sorry to tell you that your mother’s health has deteriorated. She was in the hospital for a few days last month. The doctor wanted to put her on antidepressants, but she refused to take them. She shouldn’t be alone. I’ve let the doctor know how bad she is. She refuses to go back to the hospital. Yesterday, out of the blue, she asked if I knew where you were. She’d forgotten you’d joined the Army. If you can find it in your heart to forgive your mother for her failures, perhaps you could at least brighten her day with a visit.

My protests proved moot against Penny’s insistence we move into the house on Maple Street to take care of my mother. “Ryan, no matter what your mother did or did not do, she is still the woman who gave you birth.”

How was it possible on this night, I stood ready to leave the most wonderful woman in the world?

A grandchild, as well as a daughter-in-law’s unconditional love, built the ladder Mom needed to climb out of despair, to the point she went to church with Gina Forbes. Life fell into predictable rhythms of acceptability for all of us on Maple Street. Until last year—when my wife left my bed and moved into the den. For the past year, with each sunrise, I asked myself the same question—why doesn’t my wife love me anymore?

Nor did the specter of unexplained disappearances ever leave our house. We relegated the unknowns to a corner, like a sulking child. Now my wife’s emotional abandonment completed the triangle of mysteries, a geometric spear of perplexity. Even so, we muddled through our existence, actors who performed their monologs on a shared stage.

Funny how life deludes us. One day, reality crashes upon a crafted, albeit imperfect world, which is why I now strolled up and down Maple Street and considered a different existence. Why not join the ranks of those who had disappeared?

For the second time today, I turned to a God I had yet to call my own.