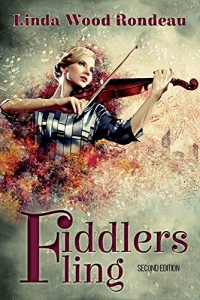 Engaged to a wealthy rising political star, a driven social worker returns to her small-town roots.With her wedding to Robert Ashworth weeks away, Jolene Murdock receives a call from Dwight Etting, her estranged father’s junior partner and her former boyfriend. The business is crumbling and her father is dying.

Compelled to visit in spite of Robert’s objections, Jolene wonders if reconciliation is possible given her father’s hatred of all things Ashworth. And there was Dwight. How could she work side-by-side with him and not reveal her secret sin?

To complicate matters her father wants her to play a duet with him in the upcoming Essex County Fiddlers Fling; however, her fiddle was among the many things she left behind when she abandoned Brookside.

More than a romance.

Set in the beautiful Adirondack Mountains, Fiddlers Fling depicts the struggle of the human spirit to find absolution in good deeds rather than accept the unconditional forgiveness God offers the repentant heart.

Jolene Murdock hopped around her room like a two-year-old at Christmas. No small thing to be offered a job at the most prestigious law firm in Albany. The cell slipped from her grasp. “Oh, spinach,” she shrieked, emulating how Eleanor Roosevelt might have said it. She caught her lifeline, the portal to her world, a split-second before it met a watery end in her fish tank.

On the other end, Robert Ashworth clicked impatience. “I sense you have reservations?”

“You’ll head up our charitable foundation, oversee our donations, arrange fundraisers for recipients, and be an ambassador of good will. Your social-work degree will be an asset.”

“I’m not a certified social worker…yet. I only have my bachelor’s degree.”

“You can get your Master’s in Albany. My father’s firm will pay for your tuition. Take a few seconds if you need to.”

She’d already made her decision. Instead of revealing her giddiness, she took the allowed few seconds to examine the downs, if there were any besides the fact her father would never approve. The strangeness of it all should be considered. Why did Robert’s father want to hire her, Jolene Murdock, a simple girl from Brookside? Granted, she’d graduated with honors from Vassar, no small feat. And she was the daughter of the Democratic Chair for Essex County. She’d been a protégé of Robert’s mother since the summer following high school graduation—a woman who bolstered Jolene’s confidence like the mother Jolene never had. So…why not her? Maybe she really was the perfect choice for the position.

But what about Robert? Did he want Jolene to be hired, or had his mother put him up to it? He was three years older than she, and they’d been an item her freshman year, in spite of her father’s insistence she not date older boys. Daddy needn’t have worried. Once Robert took off for Harvard, she saw him only a few times, generally at some political function and always with his mother.

The silence grew awkward, and the sounds of drumming fingers carried over Robert’s phone into Jolene’s ear. “I need an answer. What do I tell my father?”

“Tell him I accept.”

“Then pack your bags and get on the train to Albany tomorrow. You start Monday.”

“Nothing to gain by waiting. You can pick up your ticket at the station. We’ve arranged for you to stay in the empty guest house on our estate.”

Her doubts resurfaced, and she had to voice them. “Why me, Robert? There must be a slew of candidates far more qualified.”

“Mother recommended you to Dad, and she thought hiring someone from Brookside an absolute necessity. She hopes you’ll become interested enough in politics to help with my campaign for city council.”

“Alicia Davenport is my campaign manager.”

Brookside’s version of Lucrezia Borgia. “I remember her. She graduated a year ahead of you, as I recall.”

“She’s a fantastic campaign manager. Majored in political science at Georgetown and interned at the White House. I’m lucky to have someone with her qualifications.”

Knowing Alicia, adorned with long black hair and the poster-image for Fitness Gym, luck probably had little to do with his hiring her or her long list of credentials as the root of his admiration.

“What should I bring with me?”

“Just a few changes. Mother intends to take you shopping as soon as you get here. She’s looking forward to teaching you the latest fashions. I sometimes think she wishes I’d been a girl. She considers you like a daughter.”

In truth, Mary Ashworth had given Jolene a second birth when life had been at its lowest.

“We’ll see you tomorrow then.” Robert disconnected, and she imagined him checking off this call on a list of tasks, going on to the next. Besides, he probably hadn’t expected any other answer than the one she gave. No one refused an Ashworth.

In this case, she’d accepted, not from intimidation but rather opportunity. Who wouldn’t be thrilled to head up The Ashworth Foundation?

Why couldn’t he see the good? The Ashworths had treated her with nothing but kindness. She’d judge them based on her own interactions, not hand-me-down mistrust. Besides, if he had his way, she’d marry Dwight Etting and give her father half a dozen grandchildren. Of course, Daddy would be hurt if she didn’t play a duet with him in the upcoming Fiddler’s Fling. He’d already cleared off a spot on the trophy case next to their last first-place finish.

Mary Ashworth had been right. “My dear,” she’d said, “if you want to do something meaningful with your life, cast off your country ways. No one will take you seriously with a fiddle in your hand.” Daddy must come to terms that his little girl’s dreams did not include Brookside.

She’d fix him a pot roast for supper then break it to him during dessert. Apple pie…his favorite. She glanced out the window at the blackening clouds. A late afternoon thunderstorm meant he’d quit work early. As he always did when he came home, he’d start asking questions before the screen door closed. “What did you do today? Did you find a job yet? If not, you can always work for me. You handle a set of tools better than half the men I have working for me.”

The hard thud of the back door jolted her back from her musings and added to her worries. “Jolene!” His tone scolded as if she’d taken the ATV without permission. Could he have heard about her job offer already?

She blew resolve and took the main staircase to the living room, glaring at the peeling paint, the walls suddenly grotesque with sameness, every room a dull off-white. Daddy stood by his treasured trophy case, a roaring lion protecting his den. His face burned with anger. “Is it true what I hear?”

“You and that Ashworth boy?”

“Ken Etting said he heard about you and young Ashworth dancing at the ball last night.”

“Where did he hear that?”

“Dwight was there?” And he couldn’t even speak to me?

“He’s home on leave. Went to the ball in his father’s place since I don’t dance anything except a jig, and neither does Ken.”

“That’s too bad ’cause you should have been dancing with Dwight and not that Ashworth boy.”

“That Ashworth boy is named Robert. Why can’t you say his name?”

“’Cause he’s cut from the same dirty cloth as his father.”

The same condemnation she’d heard since high school, and it didn’t deserve a response.

The thought niggled like a stuck piece of broccoli between the teeth. If Dwight saw her last night, she didn’t see him because he avoided her. “How long will Dwight be in town?”

“Left again this morning. Going for another tour in Afghanistan. I always liked that boy. Shame you two broke up.”

“Dwight Etting wants nothing to do with me. His choice…not mine.”

Big Mike Murdock and Ken Etting blue-printed their children’s lives like constructing a house. Dwight probably enlisted more in rebellion than from a broken heart. Any dream of continuing the Murdock-Etting dynasty died on prom night, when Dwight ran off in a jealous rage because she’d danced one time with the visiting Robert Ashworth.

“I’m not so sure of that. Seems like he manages to talk to you every time he’s in town. That boy is sweet on you. A father knows these things.”

She’d never won an argument with Daddy. Still, she plowed ahead, right over the boulder in front of them. “It was just a couple of waltzes. Nothing more.”

He stared her down. As a little girl, she’d become convinced he could read her mind. Even now, he seemed to know his daughter told him only a half-truth. “Out with it, Jolene.”

She sat on the couch. “You’d better sit.”

“Nope. Never did take bad news sittin’ down. Spit it out. Rip it off like a bandage, I always say.”

“Robert’s father offered me a job in Albany. I start Monday.”

She expected him to pound his fist on the end table. Instead, he paled and clutched his chest as if she’d stabbed him with a kitchen knife. He raised his head as he cocked it to one side. “Fine time to tell me. Only been three days since you graduated. I planned a party tomorrow after church. Supposed to be a surprise. Only I guess the surprise is on me.”

“I got the call five minutes ago. How could I tell you about a job offer that hadn’t happened yet?”

“I forbid you to work for them.”

She stood her ground. “I’m a grown woman now. You can’t forbid me.”

“You accepted without consulting your father?”

Her knees wobbled. She didn’t want to be disrespectful…not to the man who’d lavished her with anything she ever wanted. “I’m twenty-two. I think for myself now.”

He slammed a fist into the wall, cracking the plaster, and stormed from the kitchen and up the stairs. She heard the loud slam of his bedroom door, a clue he’d not budge until she apologized, a tactic he’d used since she was a toddler. But his tantrums no longer held power over her.

She wiped angry tears from her eyes as she headed back to her room. She couldn’t stay here tonight. Not with tensions so high. Might as well find a hotel and leave for Albany as arranged. She threw a few changes of clothes into her paisley tote that doubled as a purse then slammed the door behind her. A sound like thunder caused her to turn. She gasped at the sight.

The door window had cracked from bottom to top.