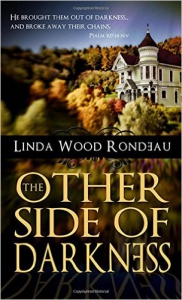 With a touch of humor, a jolt of suspense, and confusing attraction all jumbled together, she (the author) leads you through quite a winding tale. I honestly wasn't sure how it would all end--and I really love it when that happens!

Available in Both ebook and Print Editions

Can be ordered through your local library through Overdrive

Three lives intertwined, tied together by dangerous circumstance and the faint echoes of an elusive hope. To make it through, each must find their way to the Light that’s found only on the other side of darkness.

After setting out on a forced vacation, and literally running into a moose, Manhattan Assistant D.A. Samantha Knowles finds it’s not so bad being stranded in a quirky but intriguing Adirondack town. But when her three-year prosecution against a convicted killer begins to unravel, she’s thrust into a whirlwind of haunting memories, fear, and danger...and suddenly, Haven isn’t so safe, after all.

With no future in Haven, and no way to escape the small town, teacher Zack Bordeaux fears he’s doomed to a life of mediocrity.

Haunted by the deaths of his wife and son, landscape artist Jonathan Gladstone feels bound to an estate he both loves and loathes.

He stilled the storm to a whisper; the waves of the sea were hushed…and He guided them to their desired haven.

Samantha Knowles leaned against the table for support as Bailiff Don Hunter came to the front of the courtroom. “All rise.” Judge Normandy entered, his limp necessitating a much longer plod from his chamber to the bench. Soon, the wait would end—three years of sleepless nights, endless days of preparation, postponements, and courtroom theatrics by defense attorneys. After three interminable years, Justice would now show its face.

As the judge took his bench, the crowd silenced to await his summation. Sam glanced at the defendant’s table where a calm Harlan Styles sat, a wart on the cheek of humanity, an insulated icicle against the rising heat, tried and convicted—the rest up to Normandy’s guillotine.

She fingered her notes, though she didn’t need to see them—the image of Kiley’s tiny, battered body tattooed on Sam’s brain, a brazen scar, indelibly etched on her heart.

Judge Normandy spewed his rhetoric—penal codes entwined with case facts, cold, distanced from the victim, yet succulent to Sam’s ears. In spite of their dry, unflavored essence, she feasted on his words—each pursuant finding heaped upon the other and topped with the last morsel, “The court can find no other just rendering than life imprisonment.”

Victory should taste better, like syrup over pancakes—not this metallic aftertaste.

A woman’s scream silenced the murmurings, and Sam turned with the rest of the throng toward the source. Kiley’s mother, Brenda Smith, had leaned over the rail and grabbed Styles’s sleeve while Don Hunter ordered her to step back.

Brenda was weak—just like Mama was weak. Brenda Smith deserved the same fate as Styles. Too bad stupidity wasn’t a felony.

The DA stood in the back of the courtroom. Without a word, Abe Hilderman, her boss and second chair, abandoned Sam to shake the DA’s hand. A simple, “Good job, Counselor,” would have been nice, even a slap on the back. Nice, but not necessary. Abe often said that Justice was its own reward.

Emboldened, Sam stepped closer as the deputy handcuffed Styles. He saw her, pulled free, put his shackled hands on the prosecutor’s table and leaned into Sam’s face, his cologne lethal… a designer blend—suede, water, and moss—like Daddy’s. Sam fixed her stare into steel-gray eyes, magnets that drew her headlong toward a spinning saw—Styles’s demeanor, a calloused calm…except for his lips… parched, purple–tinged lips that formed his threat. “Keep your light on, Miss Knowles.”

Her spaghetti legs wobbled. Three years of lamp-lit nights had failed to chase away the recurring dreams—dreams Sam kept secreted from everyone, especially Justine, Sam’s best friend. How, then, did Styles know she kept a light on all night?