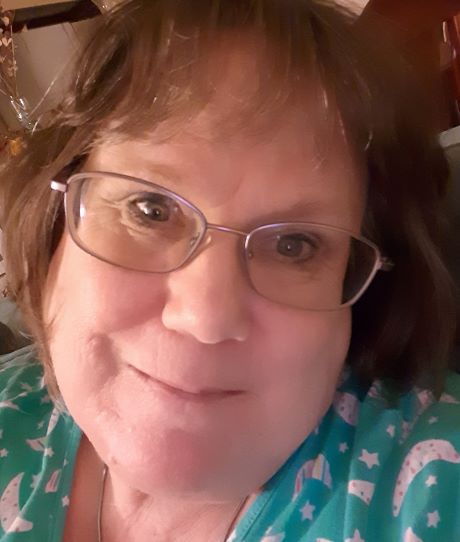 It took all the effort Little Grass had, but he finally did it. The dirt surrounding him since birth no longer held him. He pushed through to the sunlight. Now he could grow tall. He could wave in the breeze with the other grasses and be drenched by the spring rains. He could feel the warmth of the sun’s rays cover him.

Then one day men came swinging large sharp things. Ouch! They whacked him off at the roots and bundled him up with the other grasses next to him.

A wiser stalk of grass under him said, “I have heard stories. This is the end, my friend. No more water will seep up into our veins because we have no roots. They will dry us out. We will become yellow and brittle.”

“No,” Little Grass shut his eyes. “There has to be more. We must have purpose.”

Another blade of grass next to them laughed, but it was not a happy laugh. It sounded harsh and sad. “Our purpose is to be consumed. Either animals will eat us so they can grow, or we will be thrown over coals and caught on fire so others can be warm.”

Yet another groaned. “We don’t matter. We’re worthless now. This is the end.”

“I don’t believe you. Any of you.” Little Grass stretched himself as long as he could. “We have more purpose than that. We have to. Why else would we’ve struggled so hard to push out of the darkness? Something deep inside of us yearned to find the sunlight.”

“Yes, and all for nothing. Now, because we have no roots to draw in the water from the soil, the sun will bare down on us and parch us until not a drop of moisture is left in us. We will become yellow and brittle. Dead. Why did we ever push out of the ground?”

Sure enough, the men spread the grasses out onto the dirt. The sun’s heat bore down onto them day after day. Little Grass could feel all the water in his veins leaving him. His stalk became stiff. He no longer could bend and dance in the wind as he’d loved to do. “At least this is making me stronger.” Little Grass smiled. “Maybe there is a reason. I have to believe that.”

The other grasses sighed. “He’ll learn. The worse is yet to come.”

Ropes were tied around the grasses and they were lifted high onto the back of a donkey. Little Grass lay on the very top of the bundle. “I had no idea the world was so big. All I could see before was the tops of other grasses. Now I can see trees, and birds, and mountains. Oh, this is wonderful.”

The other grasses sighed. “He just doesn’t get it, does he?”

They traveled all day. At night, the stars shone down on the grasses as their animal carrier and the men rested. One star gleamed so much brighter than all the others.

“Oh, look at that, Little Grass gasped. “I have never seen such a beautiful sight.”

The next day the caravan journeyed over hills and down into a valley. Then, at dusk, the donkey carrying the grasses stopped. Little Grass craned to see why. People shuffled by. There were so many of them, and other animals, too. Their footsteps kicked dirt into the faces of the other grasses lower on the donkey’s back. They complained.

Little Grass wondered where all these people headed? He saw a building with lanterns shining in its windows. “Are we going in there? Into that golden light?”

“No.” One of the other grasses sighed. “We will be laid in the stable. Soon the animals will eat us and we will die.”

The little piece of grass shook his head. “I don’t believe that. Something else will happen to us— something wonderful. We were made for another purpose. I just know it.”

Then, a man gathered the grasses and spread them in a manager. “There. In the morning, the animals will have a feast.”

The grasses all groaned and told each other goodbye. All except the little piece of grass.

In the middle of the night, strange noises woke the grasses. A donkey came in with a man and a woman. She groaned and huffed deep breaths. His voice remained soothing and calm. Then, after a while, a third voice sounded—a soft babbling. It came from a very small human.

The woman took off her shawl, wrapped the wiggly baby in it, and laid it on top of Little Grass and the others. Immediately a warm glow spread through them. They became soft again, not stiff and scratchy.

“Oh, “Little Grass sighed with wonder. “His body has made us alive again.”

They wrapped their stalks around the child to keep him warm. Then the grasses heard beautiful voices singing from above.

The woman smiled. “Praise be to God, for he found us this dry stable and these warm, soft grasses in which to lay his son, Jesus.”

The people who came to witness this miracle responded, “Praise be to God for the stable and the grasses.” And they bowed before the manger as the baby cooed. Some brought gifts.

The smallest amount of moisture left deep inside Little Grass formed into a drop, like a tear of joy. “See, I knew we had a special purpose.”

“Yes, you were right after all,” the other grasses admitted. They glowed with happiness and cuddled themselves around this child of God. Together, the grasses worshipped him the only way they could—by being there for his use.

I raised you up for this very purpose, that I might display

my power in you and that my name might be proclaimed 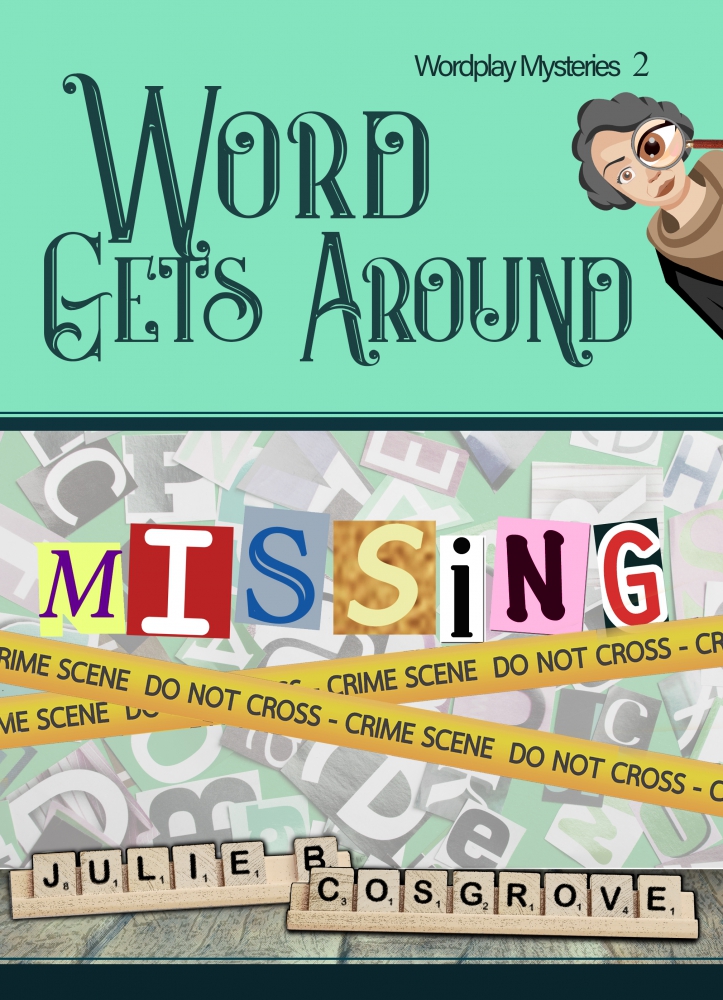 nephew Todd Martin, who has returned to become the town’s newest police officer makes it three.  Wanda understands small-town folk have long memories. The last they knew of Todd, he’d left after high school as a troubled, lanky, quiet teen victimized by his parent’s scandalous divorce and subsequent exit. Wanda took him under her wing during those turbulent years, and they shared many an evening at her kitchen table playing Scrabble and solving the word puzzles from the Dallas Morning News.

Little did she realize her word-solving skills would help thwart crime from seeping into her town. Determined to make Todd shine, she forms a neighborhood watch and stealthily involves her two best friends, Evelyn and Betsy Ann, in sniffing out criminals using the best tool she knows ... words.

There are two Wordplay Mysteries published with a third anticipated in February 2022 and a fourth in late summer or early fall of 2022.

Word Has It  –  Not prone to gossip, Wanda keeps to herself. But when she hears from her 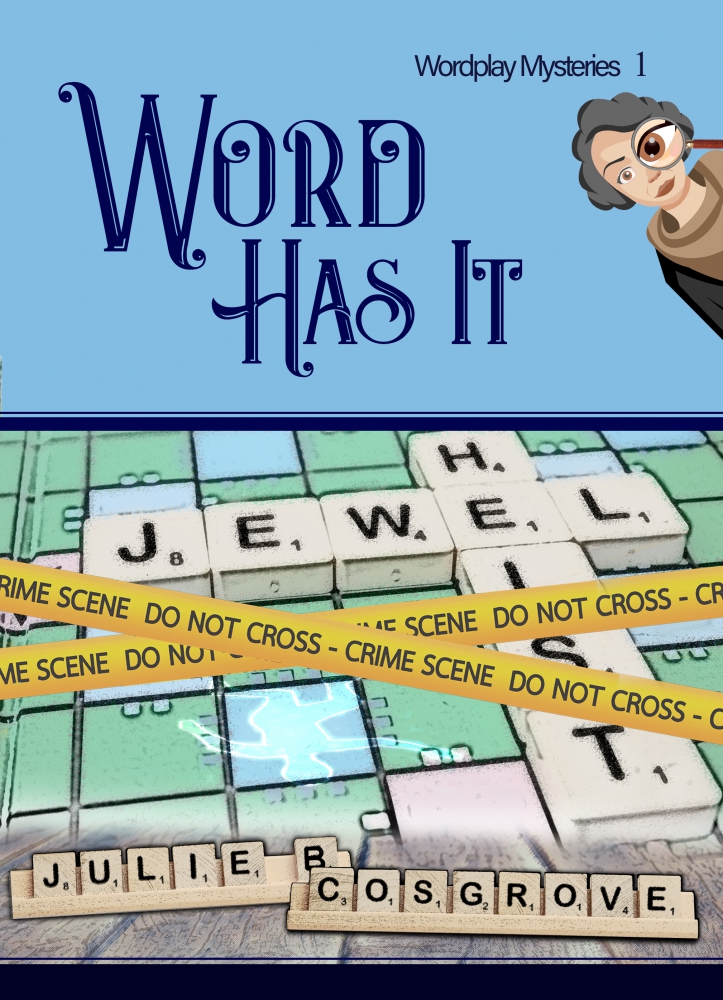 nephew that a ring of thieves may be hiding out in the area, she begins to wonder if the old Ferguson place is still abandoned. When words like jewels, woodshed, landing, and evil appear on their weekly word game then a deadly shooting occurs, she determines these are signs she and her friends should investigate.

Word Gets Around – Each of the three ladies receives a nonsensical note slipped between the wiper blades of their cars. When the ladies combine the words on a word game board, they spell trouble for one of Betty’s former students, who is now a freelance reporter for the Oakmont County Gazette. Could it be she reported way too much?

About the Author Julie B Cosgrove:

Whodunnit? My mom used to ask us that with a hand cocked on her hip, peering into our wide-eyed faces. Naturally, the blame trickled down to the youngest one—me. I had to solve the crime so I could plead my innocence.

On walks through the Texas Hill Country with my dad, I became a keen observer of nature, and later in life as an adult and writer, of human nature. So sleuthing is part of my DNA.

I wrote award-winning works in high school creative writing class, but then life edged in. Even so, on my long commutes, I’d make up storylines in my head. After my husband passed away, the desire to write returned. My sister suggested I write mysteries, which had long been my favorite genre.

Now I absorb mysteries whenever I get the chance, then let the whodunnits capture my imagination … and my keyboard. After nineteen fictional works published or in edits, thirteen of which are mysteries, I think I’m finally becoming who God intended me to be.

I also write devotionals and was the content editor of over thirty-two writers for CRU’s digital ministry for six years. I still write for several publications as well as my own blog now in its tenth year, Where Did You Find God Today? I am a fiction and nonfiction editor for Elk Lake Publishing and Roaring Lambs Publishers as well as taking on freelance editing. You can preview my works, my blog, and my fees at juliebcosgrove.com.