For those who love cozy mysteries, this contemporary story is set in Edgewater, Colorado. While I made up the location of this store, many of the other setting details are accurate. And for those who like a little romance, Margie and Edgewater police detective Ed Hogan are taking itsy-bitsy baby steps in their relationship.

Writing this series from a Christian worldview has been interesting, as both of my characters are believers who are still feeling their way in the world. Also, running a bookstore is a new experience for me as a writer, so I’ve capitalized on conversations and research into independent bookstores.

EXCERPT FROM HEAVIER THAN BROKEN HEARTS

Dead men are heavier than broken hearts—at least according to Philip Marlowe.

Margie Hanson snapped the tattered paperback copy of The Big Sleep shut and dropped it into the oversized IKEA shopping bags provided at the front door of the bungalow on the outskirts of Edgewater. She sipped her Peruvian coffee, a housewarming gift from Ed, her favorite Edgewater PD cop, and returned to scanning the meager offerings while wishing she could have been here on Day One rather than the last. Her fingers did the walking through the other titles. A few mysteries of little to no value. Perhaps not even worth the quarter noted on the sign on the table. The markdown table in her mystery bookshop bore many of them in better condition. Still, she could pay twenty-five cents and sell them for a dollar.

Seemed ridiculous that this legendary hard-boiled detective should end up in such incongruous circumstances. The story—the first in the Raymond Chandler series, read like a roller-coaster ride on Coney Island. That every woman in the story had legs that didn’t quit was a Chandler standby, not to mention the lingo of the era.

Still, the pithy comebacks and knuckle sandwiches didn’t sit well with many contemporary readers, unless they happened to be of a particular age. Thankfully, she still had several who snatched up everything published prior to the 1970s that she set out.

She sighed and shifted her already-heavy tote on her left shoulder, holding her cup in the same hand, leaving her right free for shopping. Bookcases lined and divided and sub-divided this room, apparently turned into a library. Many of the books lay at an angle, the shelves no longer filled. Old paper and dust mites competed for position, and she was fairly certain she’d seen a silverfish running for cover on the previous table.

Ah, this was better. Another complete case filled with mysteries, some going back to the sixties and even the fifties.

Margie set the tote on the floor and pulled over an empty milk crate on which to perch. Using her phone’s bar code scanner app, she sorted books into the tote which bore promise. The sign said hardcovers were a dollar, paperbacks a quarter, and audiobooks fifty cents.

As she worked her way through the shelves, she considered her clientele. Would they be open to listening to books in their cars? Few drove more than a couple of blocks each day. Although, most would have a CD player at home. And with summer coming, perhaps she could promote this media form for road trips.

She dropped a dozen mystery books by various famous as well as unknown authors into the tote. Time for a new bag. No point dragging a full one around.

A glance confirmed she was the only person in the room right now.

Should be safe to switch out the bag. She grunted at the additional weight and headed for the cash register near the door. After explaining she needed them to hold the bag so she could continue shopping, a teenager offered to provide boxes to pack her finds in and followed her back to the library.

“Do you work for the estate sale company?”

He shrugged. “Nah. The woman who owned the house was a distant relative, like a great-aunt, or something like that. What about you?”

Great-Aunt Roselda’s face immediately surfaced, and Margie sighed at the dismissal of this boy’s relation so callously. Her great-aunt was the reason she lived and operated a mystery bookstore in Edgewater today. If not for her, she’d probably have taken a safe job at a college or a public library, staying there until she retired. After all, it’s what she wanted to do, right?

Wrong. It’s what she thought she wanted to do, at the time. But with Roselda’s murder came the need to set the world right again. At least her own little part of it. And with Grandma Carly’s help, she’d done just that.

Just think. If she’d not come here when the older lady called, she’d not have met Ed, either. Although they still danced around each other, he did trust her to look after Bruno, the puppy he fostered for a guide dog society. And she managed to get him to admit that she had as good a nose for mysteries as her grandmother and great-aunt did.

High commendation, to be certain.

“No, I don’t work for them, either.” Margie giggled at her witty comeback. Then again, judging by the teen’s downturned brow, perhaps not so much. “I run a bookstore.” She gestured to the surrounding inventory. “She collected a lot of stuff, didn’t she?”

Another shrug. “I guess. She never threw anything away, I don’t think. When we came here after she passed, she had stacks of newspapers and magazines all over the place.”

“Did she live here long?”

He ducked into a small room and emerged with three whiskey boxes in his arms. “The family’s been here over a hundred years, and they were worse than her. We found a desk that was like a time capsule. Every piece of mail they received was shoved in a drawer or one of those little things like a cubby. What do you call it?”

“Yeah, that’s it. We found a diary from the Civil War. A key from an old lock nobody uses anymore.”

“Yeah, like that. They were even in the paper a couple of times. Talking about all this junk.”

Margie snagged two of the boxes. “Let me help you.” She set them next to the bookcase where she’d left off. “I saw one recently, which is why I perked up at the notice of the sale. Was it busy the last couple of days?”

“Packed. Like sardines. People were crazy, arguing over stuff. We could barely move in here, and still they wanted to know what else we had. Or if we had a three-eighths inch widget. As if we’d know. I just keep hauling boxes and stuff from the attic and basement. Caught an old guy sneaking up the ladder. Said he was looking for some books. I told him to get down, it wasn’t safe, and there were already hundreds of books in here. Sheesh.”

Margie smiled at the image. It’s exactly the kind of thing she might have done if she thought she wouldn’t get caught. The never-ending search for that one special volume could be all-consuming. “Thanks for your help. If I need more boxes, I’ll let you know.”

He nodded toward a corner where a teetering tower of boxes sat. “Those are all full, so if you need another box, feel free to dump them on the tables. We’ll sort it at the checkout.”

Dump books? Never in her lifetime. The child had no sense of decorum when it came to the printed word. She pushed his words aside and pasted on a smile.

ABOUT HEAVIER THAN BROKEN HEARTS 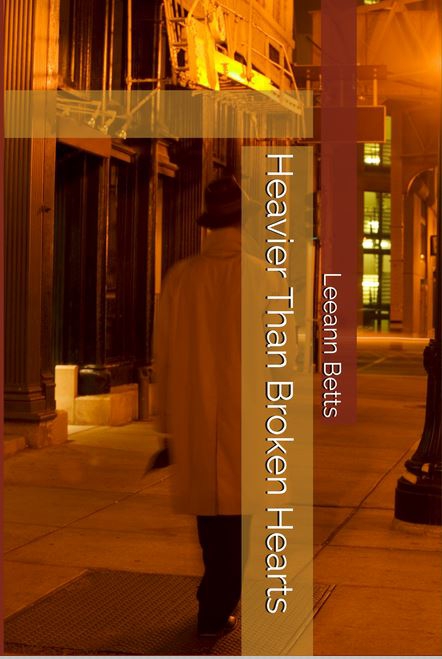 Dead men are heavier than broken hearts—at least according to Philip Marlowe, the legendary detective. Margie Hanson discovers a copy of “The Big Sleep” in a box lot of books at an estate sale, and she snags it to sell in her bookstore, along with a spice rack and spices for her kitchen. At home, she discovers neither is what she first thought. Can she solve these two mysteries before somebody succeeds in snuffing her permanently?

Celebrate the release with me today! https://www.amazon.com/s?k=leeann+betts&ref=nb_sb_noss_1

Leeann Betts writes contemporary romantic suspense, while her real-life persona, Donna Schlachter, pens historical romantic suspense. Together she and Donna have published more than 30 novellas and full-length novels. They ghostwrite, judge writing contests, edit, facilitate a critique group, and are members of American Christian Fiction Writers, Writers on the Rock, Christian Authors Network, Pikes Peak Writers, and Sisters in Crime. Leeann travels extensively to research her stories and is proud to be represented by Terrie Wolf of AKA Literary LLC.

Website: www.LeeannBetts.com Stay connected so you learn about new releases, preorders, and presales, as well as check out featured authors, book reviews, and a little corner of peace. Plus: Receive a free ebook simply for signing up for our free newsletter!