Photo by freestocks.org on Unsplash

Wiping the sleep from my eyes, I saw her squatting and looking eye to eye at the packaged item standing under the Christmas tree. It was four in the morning, and I had no idea how long she had been there.

I was grateful for the toys and clothes Mother had bought for my children. She had set a few unwrapped items under the tree before retiring to bed, doing her bit to keep the fantasy of Santa alive for another year—a magnanimous gesture for one who so despised the myth.

If it had not been for her, my children would have wondered if Santa cared about them. Divorced, unemployed, and with a scant amount of support money, what little allowance I received from the government barely paid for rent and food. Outside of crayons and coloring books, Christmas, as I hoped it would be, was out of the question.

Mother understood my heartache. She herself had known many disappointing Christmases, and hoped to provide better for her own children; but, it was not until Christmas, 1948, that she first began to actually despise Santa. “Santa Claus is a cruel hoax for poor children.”

The years following World War II were difficult for returning vets. Jobs were scarce and finding shelter for their families a daunting task. The only housing my parents could afford was in the south side of the city. They rented a cold-water flat, the euphemism for apartments with no running hot water. Rats often found their way into the cleanest of these dwellings. The adaptive rodents would eat anything, even gnawing their way through aluminum garbage cans. They thrived in cold-water flats. Fearful that the rats would bite her children, Mother spent many sleepless nights vigilantly listening for any sounds that might indicate danger.

A child of the depression and a wife of a war soldier, Mother was grateful for her surroundings, grateful that her family was together under one roof even if money were scarce. My father’s factory paycheck paid the rent and bought food—leaving little for luxuries of any kind, especially events like Christmas. I was still a baby, unaware that there was a special day to be excited about. My brother, on the other hand, had been looking forward to Christmas and to Santa’s showering of presents for all good boys and girls.

At first, my brother was thrilled when he opened the holster gun set and cowboy hat under the tree. “Oh, boy! I’m a real cowboy, now!” He flitted about the house shooting bad men that lurked behind the couch and chair. Then he took his treasure outside. It was not long before he rushed back into the house, his countenance forever changed. “Have I been good, Mom?” my brother asked.

“Of course, you have,” Mother reassured him.

“Then why did Santa Claus only bring me two presents? Santa brought Danny ten presents and a new bike?”

My mother didn’t know how to answer his child spirit. How could she explain poverty to a four-year-old, an innocent who didn’t know he was poor? Mother took the fall for Santa.

“Well, honey,” she ventured to explain. “Moms and dads have to pay Santa for the presents. We didn’t have very much money to give him.” She watched helplessly as her child faced the brutal realities of social inequities for the first time in his life, knowing the experience would be repeated many times over.

Yes, I knew Mother understood the heartache I felt that Christmas.

My three-year-old turned to look at me, eyes filled with tears. “For me?” she asked, not quite believing it might be true.

“Yes, honey. Santa brought it for you.”

I helped her remove the cellophane wrapping. She hugged the treasured gift so tightly, her little fingers turned white.

“It’s just what I wanted! He remembered!”

In my heart, I was grateful to a mother whose memory reached from her pain and gave comfort.

ABOUT IT REALLY IS A WONDERFUL LIFE 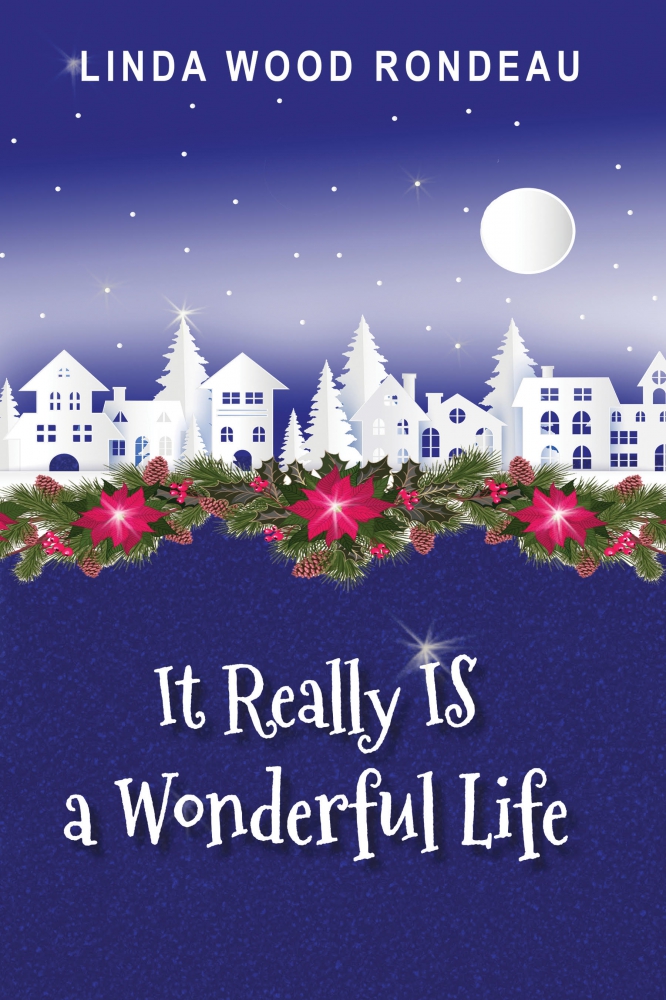 Midville newcomer and Iraq War widow, Dorie Fitzgerald, despises the frigid Adirondack wasteland that has now become her home. After twenty failed job interviews, she questions the wisdom of moving to be near her parents. Desperate to belong, she joins the local Community Theater, in production for It’s a Wonderful Life.

Jamey Sullivan has put his professional life on hold in order to run the family business and to help his ailing father. He signs on for Midville’s production of It’s a Wonderful Life, although he hopes to receive a Broadway casting call any day now.

When these two meet, they are instantly attracted to one another. However, ambition, demanding children, and a romantic rival threaten to squash their growing love for one another. Each must discover that the best things in life are found where your heart resides.

It Really is a Wonderful Life is set in the beautiful Adirondack mountains, a perfect backdrop for a Christmas romance.

Linda Wood Rondeau is a retired social worker and resides in Hagerstown, Md. Readers may visit her blog Snark and Sensibility  (also found on her website www.lindarondeau.com.) The author may be found on Facebook, Twitter, Instagram, Pinterest, and Goodreads. Her latest non-fiction release,  I Prayed for Patience God Gave Me Children, a study as well as a devotional, explores the meaning of being God’s child. The author has written ten books, primarily contemporary fiction. Watch for her short contemporary novel, Second Comings, to be released in late winter as well as her non-fiction, Who Put the Vinegar in the Salt, to be released late spring. The author enjoys teaching at writers conferences and serves as Senior Fiction Editor and Senior Fiction Acquisitions Editor for Elk lake Publishing, Inc.

Sweet story. Thanks for sharing it.

So glad you enjoyed the story.

MY POSSESSIONS MATURE ALONG WITH ME
MARIE WATTS
1/13/2020

ATTITUDE IS EVERYTHING
LINDA WOOD RONDEAU
2/3/2019

THE ONLY CONSTANT IS CHANGE
LINDA SHENTON MATCHETT
12/17/2018