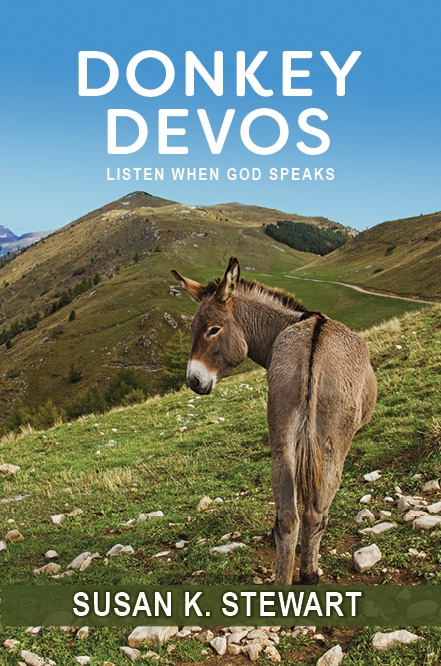 Susan K. Stewart didn’t grow up with aspirations of being a donkey whisperer. She did expect dogs, cats, and the occasional goldfish would be all the pets she’d need— Then it happened. Susan met a donkey nose-to-muzzle and a special bond was created. Three donkeys became part of the Stewart family a few years after that fateful visit. Susan soon learned these humble creatures are still messengers of wisdom.

Donkey Devos is a collection of forty pearls Susan has learned from spending time learning about her equine friends and chatting with them. She uses her experiences, donkey facts, and Biblical donkey details to share the truths God has taught. The whole family will delight in the donkey tales with a message from God.

AN EXCERPT FROM DONKEY DEVOS

Don’t be a Balam

I don’t choose to be like Balaam. Sometimes I am. I won’t listen … even if my donkeys were to speak English to me. Thinking about my actions, maybe I do make a choice to not listen to God, to go off with my own way of doings things. I tend to get the Cliff Notes of God’s plan then try to implement it my way.

OK, God, you want me to be a writer. Here’s what I’ll do. Step one: Read every book ever written on the subject. Step two: Attend every conference I can afford. Step three: Talk with my friends about the great ideas you have given me.

You get it. I do everything but what God said about his plan. I want you to be a writer, so go write.

I fear the unknown. So like Balaam’s donkey, I stop. I look for a way out. I may even back up. I certainly can make a lot of nonsensical noise.

I hope you’re not seeing yourself in my pattern. It’s likely, though. Any number of things can prevent us from following God’s lead in his plan for our lives. Pride. Fear. Name an excuse. We’ve all probably used one.

We don’t have to be Balaams. What can we do to not be Balaams?

This may seem silly to say: Listen to God. God spoke directly to Balaam. Oh, how many times I’ve wished to hear directly from the mouth of God. My goodness, I’d accept an email. I like to think that, unlike Balaam, I would heed God’s direction.
After hearing God’s word, follow his direction. How many times does God speak to us in various ways, but we don’t heed? Whether it’s one of the big commandments, like don’t steal or murder, or a small thing, like don’t go to that town, pay attention and do as he says.
Follow God’s instructions completely. Too often we pick the parts we like and ignore the ones we don’t. Partial obedience can land us in a mess with only one way out—obeying God fully, which we should have done in the fir st place.
Stay away from the evil influence. When God told Balaam to send Balak’s representatives’ home, he meant what he said. Evil is in this world around us. Once we tell iniquity to leave our domain, we don’t have to invite it back.
Don’t rush in as a fool. Satan knows our weaknesses and uses them against us. Balaam desired money and acclaim. Satan used this desire to get Balaam to do his bidding. He foolishly rushed to satisfy his weakness, without considering the cost.
Open our eyes. Balaam was focused on his own gain, not on God’s instructions. He certainly wasn’t carrying God’s message. Balaam could only see what appealed to him: gold and fame. He was blind to anything from God, even a sword-wielding warrior of God.
Look for God’s messenger. God chooses the way to get his message to us, and he will get his message through to us. Balaam was so set on doing things his way, he didn’t see the godly messenger. But the little donkey did and became the messenger. God uses what we will heed.
Stop. Stop what we’re doing when we can’t go any further. God may be blocking the way even when we can’t see the obstacle. Instead of pushing forward, stop, rethink, pause, pray. This is a good time to rest and seek God.

Sometimes God uses something inconsequential, like a meek little donkey, to get our attention. When God opens the mouth of our donkey, he is speaking. We need to listen.

Then the Lord opened the mouth of the donkey, and she said …—Numbers 22:28

As Bored as a Donkey 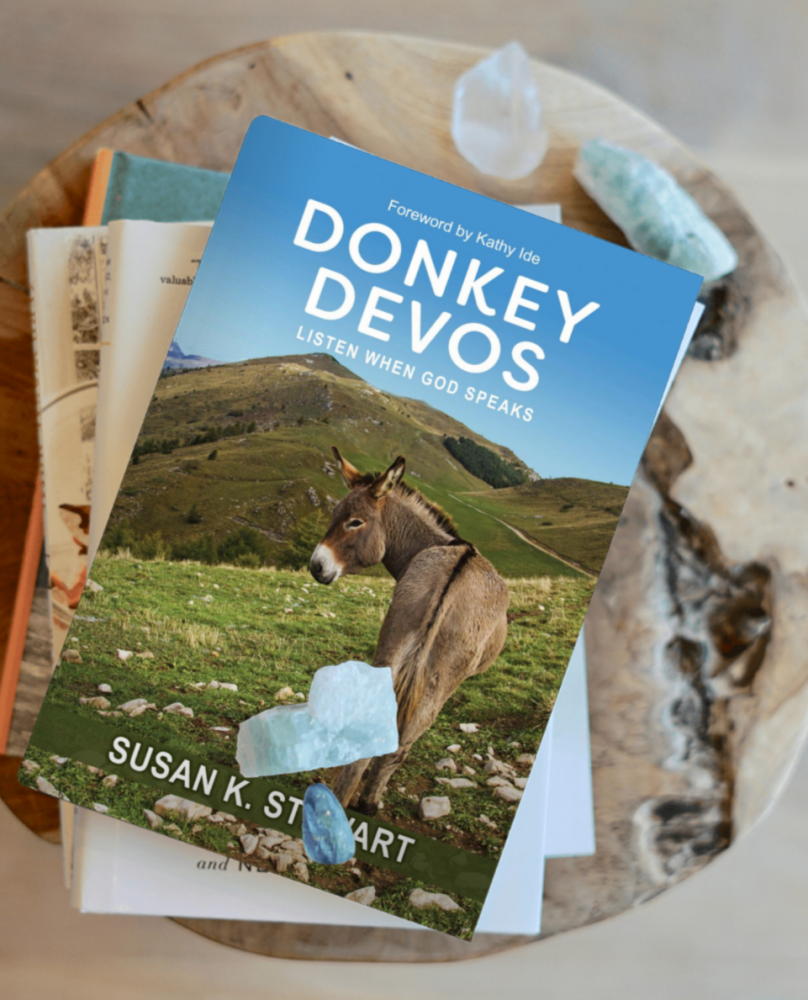 It happened again. We returned home to find Jeb and Neesy at the fence corner by the entrance gate, happily chewing a cardboard box. I failed to put up the warning sign, and the delivery man dropped the package within range of the curious donkeys.

These two seem to like the box best. Other items wrapped in plastic were set aside, or rather kicked aside, so they could get to anything encased in cardboard. By the time we returned home that day, the delivery box was nearly devoured, and they were working on the boxes other items arrived in.

Why are donkeys interested in a cardboard box set by the gatepost? We often question why our donkeys do the things they do.

When we had our three jennies, I noticed they were chewing through the trunk of a downed tree. Concerned about possible side effects, I asked our vet. He said donkeys get bored. Like a six-year-old child, when bored and left on their own, they find something to do. On the particular day mentioned above, their chosen activity was to devour a cardboard box.

Donkeys can be determined as well. Getting the box close enough to start the demolition wasn’t easy for them. One of them, probably Jeb, the master at attaining forbidden items, reached through the barbed wire fence. Whether he pawed it until he broke a side or reached through and grabbed it with his teeth, we’ll never know. Once the destruction began, he and Neesy had a good time.

Don’t we get bored? A shiny, new thing comes along, or even a dull cardboard box full of the mundane, and we grab hold. We set aside that which doesn’t seem to be tasty enough or shiny enough.

Have you ever been bored at a worship service? We think things like we sang that song last month, or the pastor says the same prayer every week. When we’re supposed to be standing before Almighty God and giving him glory, we are slouched in muck of our own making.

Think about who we worship—the Creator of the universe, the all-powerful, the One. How in the world could our lives with him get boring? What has happened to the early excitement of worshipping our Lord? What changed? Truly, not God.

1.         Worship time becomes too familiar. We get into ruts. Oh, we put nice names on them, like routine. But it’s actually a rut. One writer wrote about his rut of reading the Bible daily. Reading God’s Word each day isn’t a bad thing. In fact, isn’t that what we’re taught when we first start our walk with Christ? After several years, though, it becomes a chore rather than a joy. This man found the awe of Jesus walking on water gone. He was too familiar. He decided he needed to break the cycle of read, pray, repeat. He didn’t read the Scripture for several weeks and went back to it with renewed vision.

2.         We think it’s about us. How often do we leave on Sunday and say, “I didn’t get anything out of today’s sermon?” Or, “The praise team keeps singing the same songs.” Complaining because we aren’t happy. The service didn’t go our way. What about all the others in the room? Did we do more than shake hands and give trite greetings? Do we breathe in the words of the songs and let them flow out to God? When worship becomes all about us, we get bored.

3.         Maybe we need to do something, and not eat a cardboard box. It’s possible our spiritual lives are boring because we aren’t doing anything. We expect God, or others, to do everything for us.

4.         We seek entertainment or excitement rather than worship. Instead of entering the gates of worship expecting to give, we’re ready to get. We tend to put nice words on it like “being fed.” But we’re adults; we don’t need to be fed. We need to give—give ourselves to God.

Are we settling for cardboard boxes? Instead of experiencing the wonder of the Holy Spirit, we slump in our seat and kick aside what doesn’t personally appeal. We look for what we think is the tasty morsels. 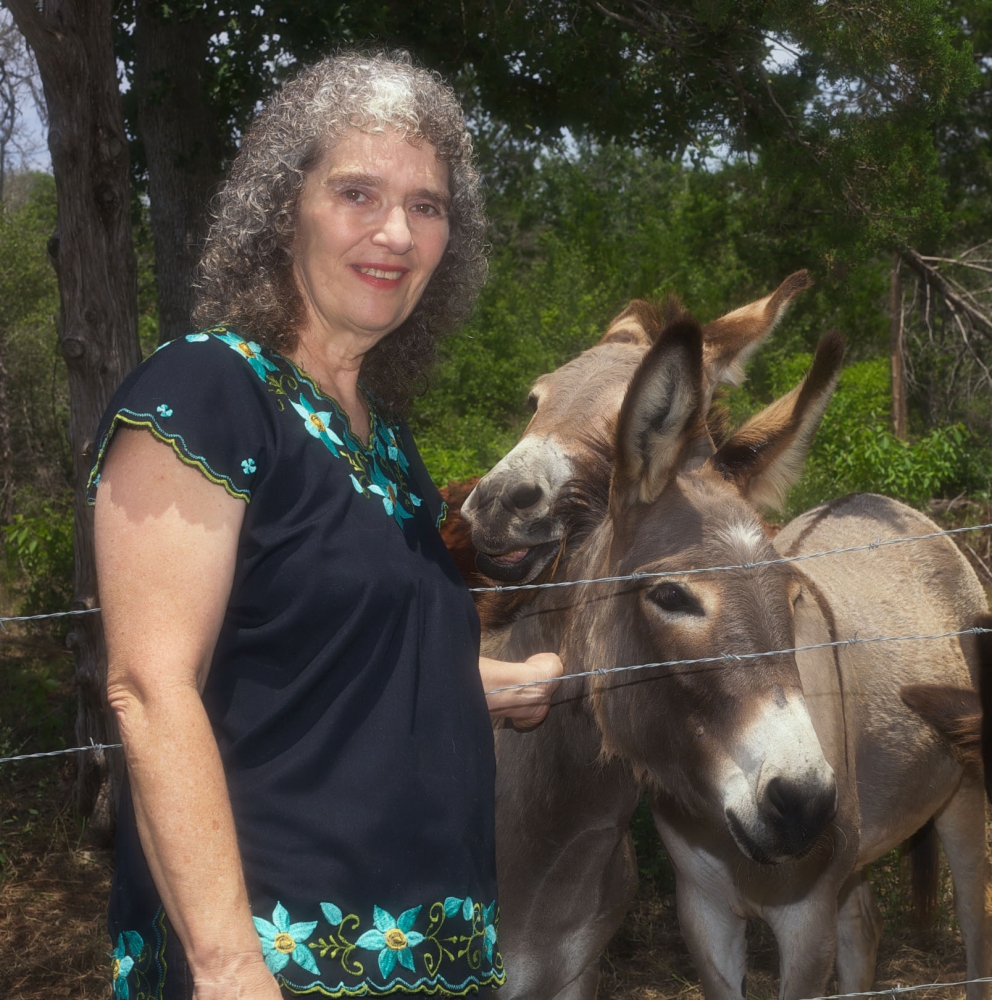 Maybe we need to make some changes in our ideas about worship. Think. Does that change begin with us? Like the Psalmist, we need to enter his gates giving thanks, not the expectation of what’s in it for me.

Enter his gates with thanksgiving, and his courts with praise! Give thanks to him; bless his name!—Psalm 100:4

“Who would think that devotions about donkeys could be interesting, much less fascinating, motivational, and spiritually inspiring? But that’s exactly what you’ll receive as a wonderful gift when you read Donkey Devos by Susan K. Stewart.”—Kathy Collard Miller, author of God’s Intriguing Questions: 60 New Testament Devotions Revealing Jesus’s Nature

Did you know the Bible mentions only two talking animals? Each of these creatures had a different message. The first to speak out was the serpent. This character certainly wasn’t a model. If God was using this snake for a test drive, I can see why he kept the mouths of the other animals closed. This snake in the grass spoke words meant for evil. Later God allowed another animal to speak—the lowly donkey. The beast of burden. This time the animal had words of wisdom.

Susan K. Stewart expected dogs, cats, and the occasional goldfish would be all the pets she’d need—until the day Susan met donkeys at a rescue center. A few years after that fateful visit, three donkeys became part of the Stewart family. Susan soon learned these humble creatures are still messengers of wisdom.

Donkey Devos is a collection of forty pearls Susan has learned from spending time learning about her equine friends and chatting with them. She uses her experiences, donkey facts, and Biblical donkey details to share the truths God has taught. The whole family will delight in the donkey tales with a message from God.

Susan K. Stewart, Managing Editor with Elk Lake Publishing, teaches, writes, and edits nonfiction. Susan’s passion is to inspire readers with practical, real-world solutions. Her books include Science in the Kitchen, Preschool: At What Cost?, Harried Homeschoolers Handbook, and the award-winning Formatting e-Books for Writers. Her latest book, Donkey Devos: Listen When God Speaks, was released in July. You can learn more at her website www.susankstewart.com. Join Susan and donkey lovers at Donkey Devos.

A delightful read. At first, I thought this was a children’s devotional book. However, this is geared toward animal-loving adults. The vignettes about The Peaceable Kingdom and donkey stories are fun to read. Stewart does a fantastic job in relating the donkey’s antics to our human nature and relationship with God. I was given a copy for my honest review. I recommend Donkey Devos.